A waterfall chart is a form of data visualization that helps in understanding the cumulative effect of sequentially introduced positive or negative values.
If the values are not defined ahead of time or variable i.e. Starting Budget, Quarterly spend (YTD), Remaining Budget is a good example where the number of quarters elapsed cannot be predetermined at build time.

Vitara offers a variation of the waterfall widget which includes a starting metric and cumulative sum of all the subsequent metrics finally shows a total bar.

The chart enables plot options based on individual metrics. The property editor displays a list of metrics, each metric can be expanded to choose plot options for that metric.
We have an option Non-Additive, where we cannot include the starting value in the total value and Auto compute total option, where we can disable the total value in the chart.

Attributes: Optional. There are two drop zones for the attribute. The ‘group by’ drop zone and ‘break by’ by drop zone.
Attributes are needed only if we want to create groups according to attribute values or if we want to break the metrics according to attribute values. We can also use both attributes at a time.
You can drop an attribute in ‘break by’ drop zone if you want to show the metric break up over attribute elements. The corresponding values of the metric for each attribute element will be shown in incremental order.
You can drop an attribute into the ‘group by’ zone to create small multiples. To know about small multiples, click here

Metrics: A minimum of 2 metrics are required.
The first Metric M1 is used as the starting value, the second metric M2 corresponding to each attribute is used to add or subtract from the starting value. The last bar (Total) represents the cumulative sum of metric M1 and metric M2.

Use as Filter Option - Not available

In the example below the group by and break by features are explained using the following data.

Break by: If we drop quarter attribute in ‘break by’ drop zone, by default chart will take the first value of the first metric as start value. If we want we can change it to total or last value also. The second metric will show in the break by the format of a quarter attribute.
In our example, the quarterly values of Delta metric are added/subtracted in 4 steps of Q1, Q2, Q3, and Q4. The third metric will be a cumulative sum to the first and second metrics. The default function for the third metric is total. We can apply a break to individual metrics also. 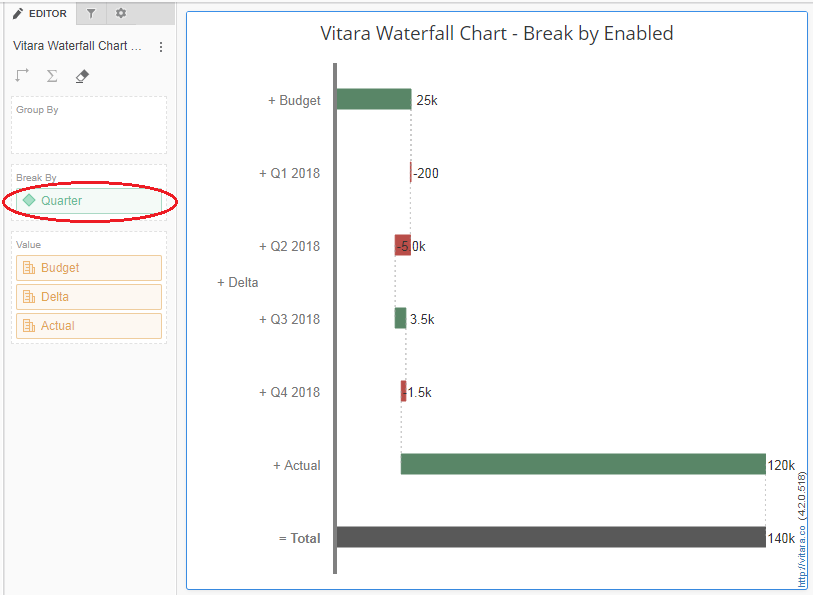 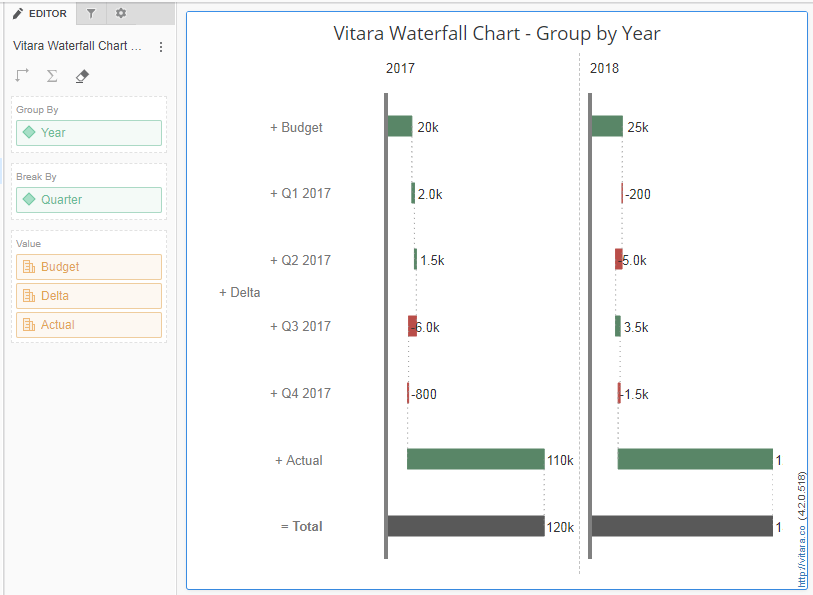 We can customize the appearance of the waterfall chart like setting bar colors and bar width.
1. Bar Colors
In the Vitara waterfall chart, we can set three different colors for the bars. They are up value color, down value color and total bar color. These settings are available in the Appearance tab.
See the screenshot below which shows the bar colors that we set.
Up color - Green, Down color - Red, Total color - Blue 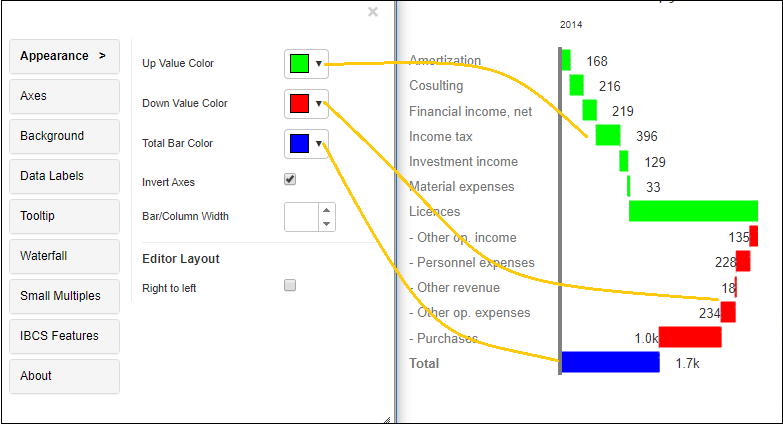 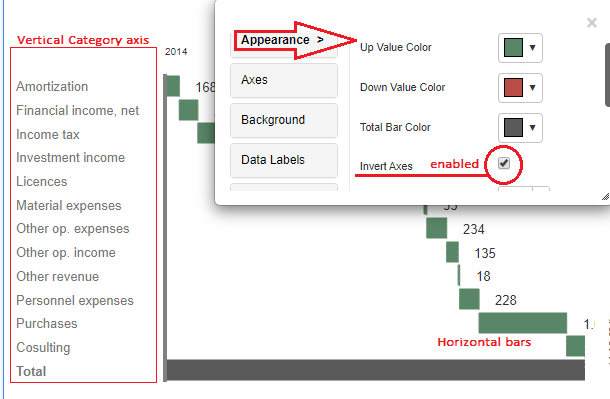 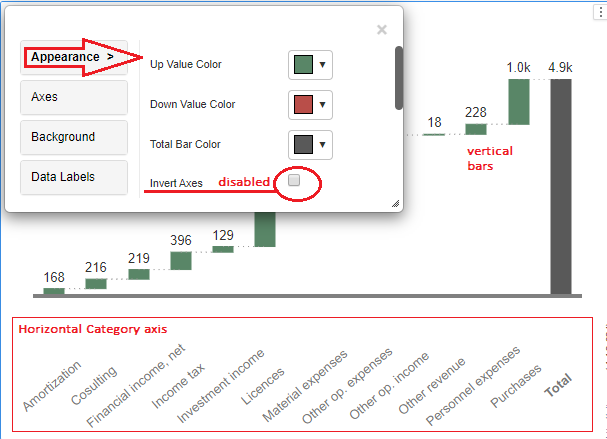 In the waterfall chart, there is one specific feature for the value axis called ‘Auto Compute Start Value’.
This setting will be useful if the first metric value in the chart is comparatively very bigger than the subsequent metric values and if we are not clear of which value to be set as the start value.
This setting is available in Axes > Value axis > Start Value. By default, this option is in disabled mode. See the screenshot below 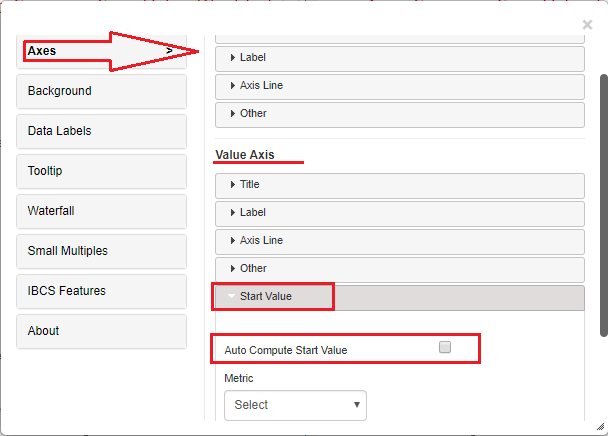 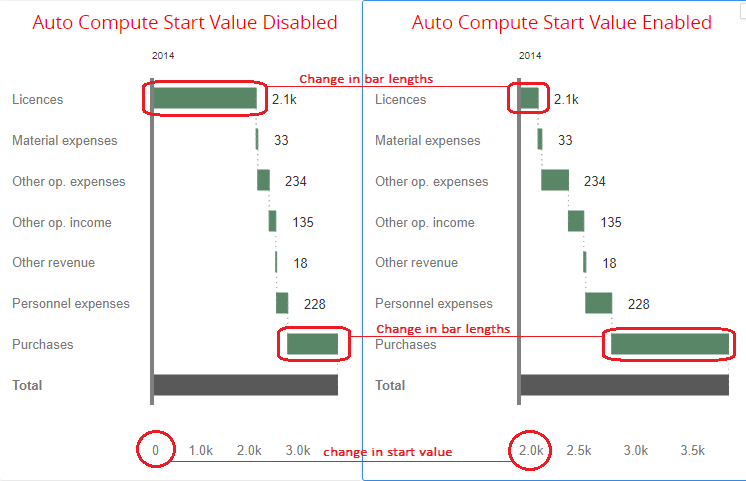 If you noticed the above screenshot, the start value in value axis and bar lengths are different. Also the space between the category axis line and bars has also changed.

From 4.4 version, a feature is added in waterfall chart to show the data labels outside the bar/column. This is available in data labels tab with ‘Show Label Outside Bar/Column’ checkbox. See the screenshot below 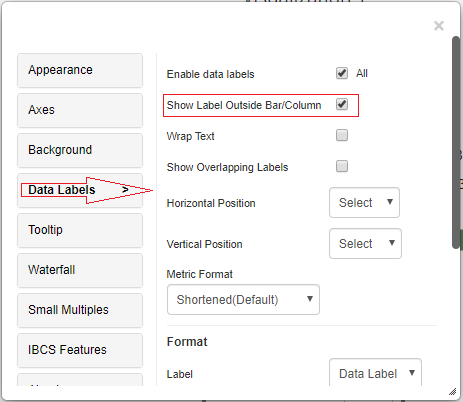 By default, this option will be enabled for the charts created from 4.1. Below screenshot shows how the data labels look after enabling ‘Show Label Outside Bar/Column’ option

In 4.2 release the concept of creating groups is introduced in the waterfall chart. We can group metrics of same nature. For example all the revenue metrics in one group and all the expenses metrics in group. The cumulative sum of these group will give net profit/loss statement. 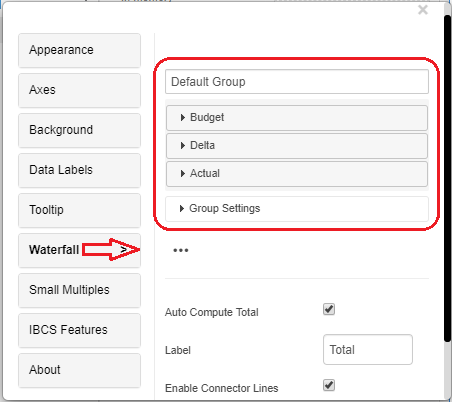 We can rename the default group or any other group. Place the cursor in the group name text input box and type the text you want as the group name.

Each group will have two options. 1. Add subTotal and 2. Deduct Value. Expand the ‘Group Settings’ tab to get these options. 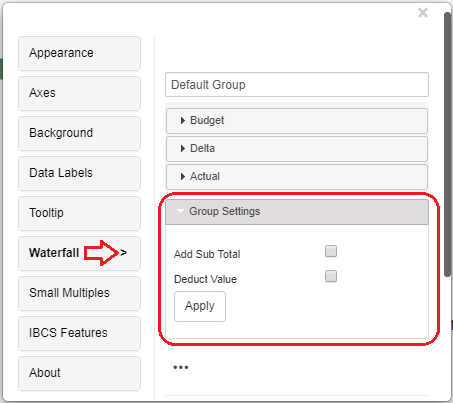 We can create a bar for each group displaying the subtotal of that specific group. Enable the ‘Add Subtotal” check box.

To create a new group of metrics please refer the below screenshots. 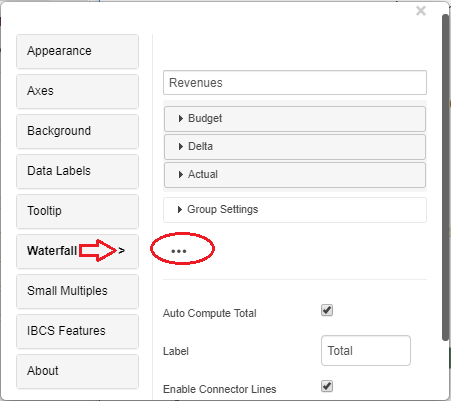 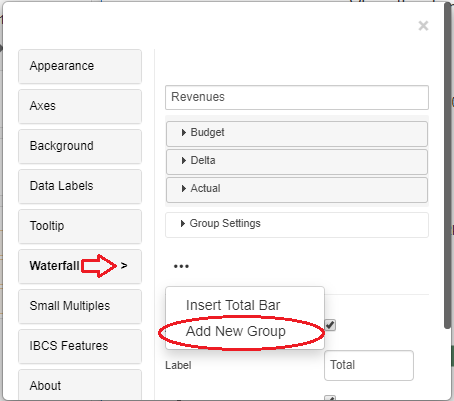 Each group will have its own ‘Group settings’ option and option to create a new group. 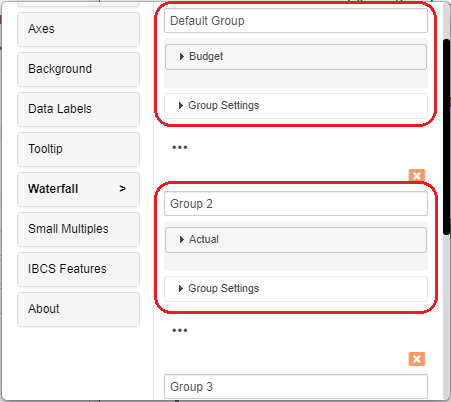 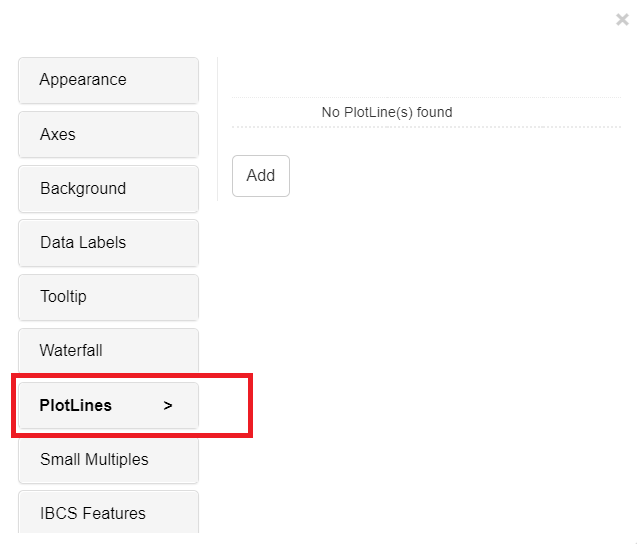 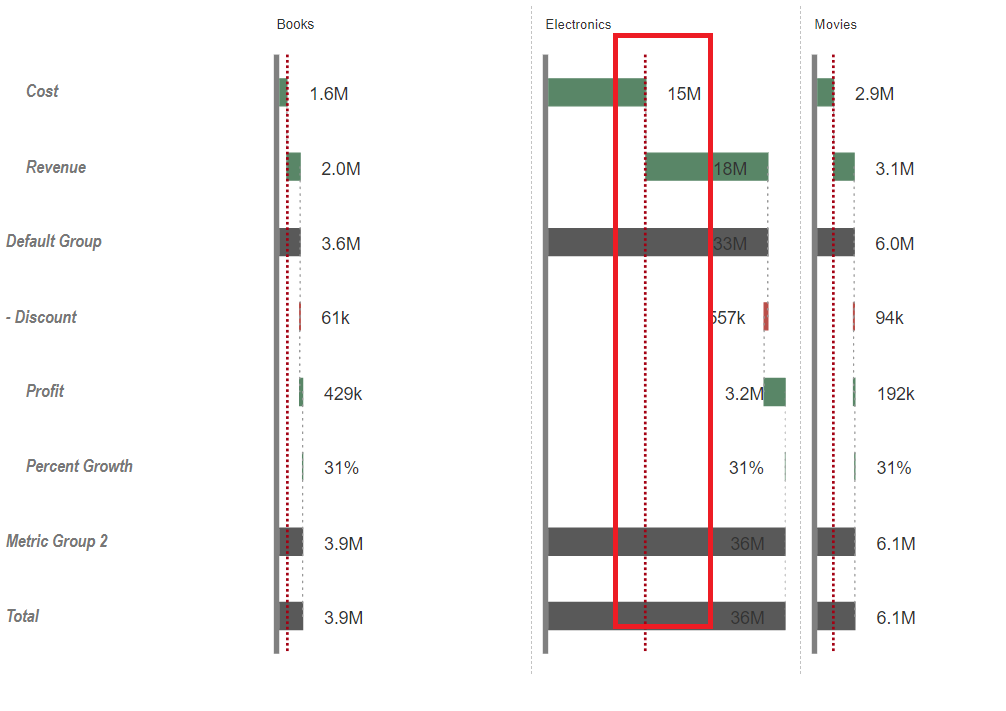 The steps to set a background image for all Vitara charts are explained in backgroundImage. 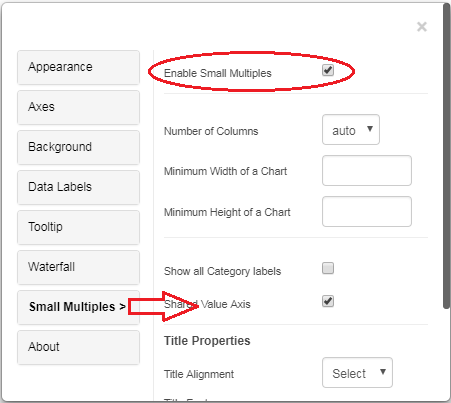 Small multiples is explained in smallMultiples.

In Version 5.1.1.010, we included a new feature that allows users to show zero value bars. This feature can be enabled under the “Waterfall” tabs, where it can be used to display metrics, whose values are zero. 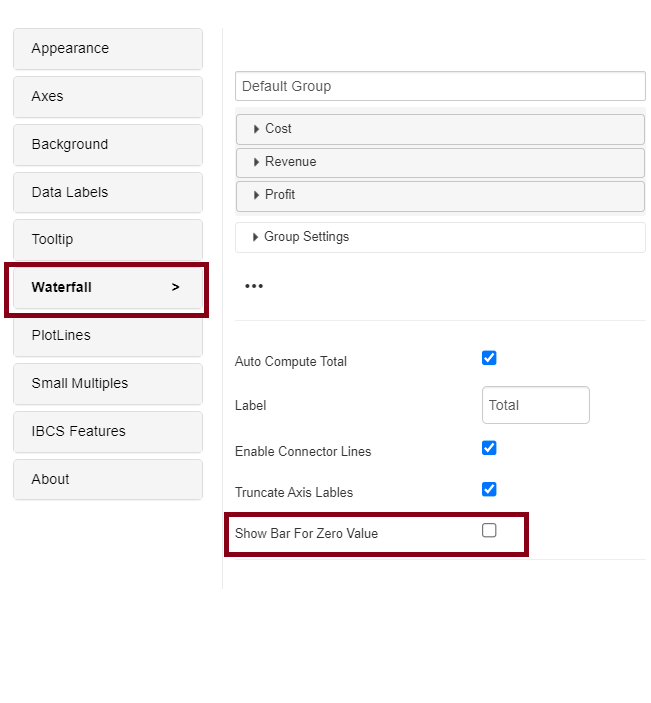 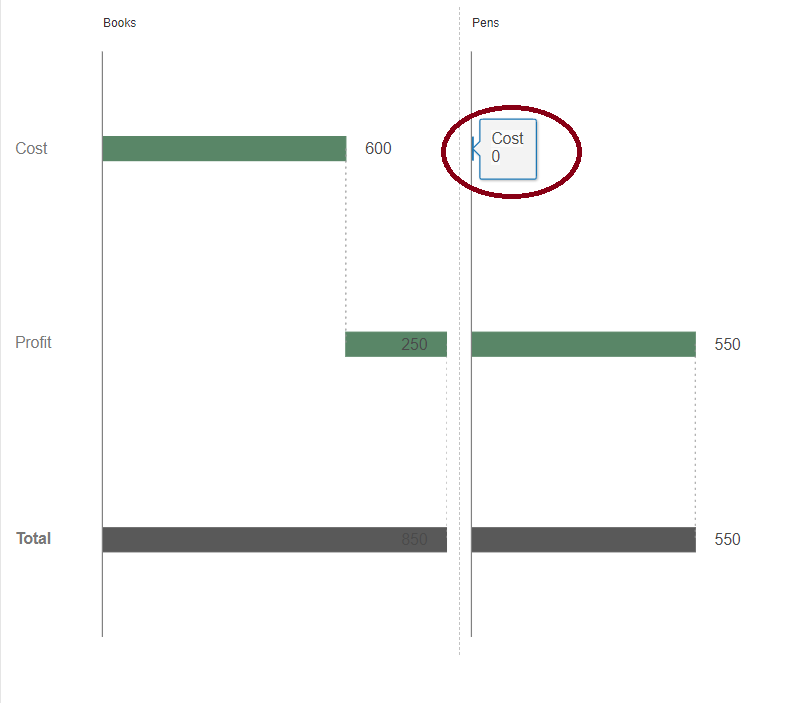