VitaraMaps Chart installation has three default charts; World Physical, US Physical, and US counties. The charts list can be expanded by adding other countries or other shapes of images and is explained in the subsequent sections.

VitaraMap acts as a heatmap. Color codes the map regions based on one given metric . The following section describes the inputs required .

1. Attributes: One attribute. For world physical map, if the attribute elements contains either iso-standard country names or iso-a2 country codes format, we can directly use without any modifications. Below is the screenshot of web page where we can get iso-a2 codes of countries. 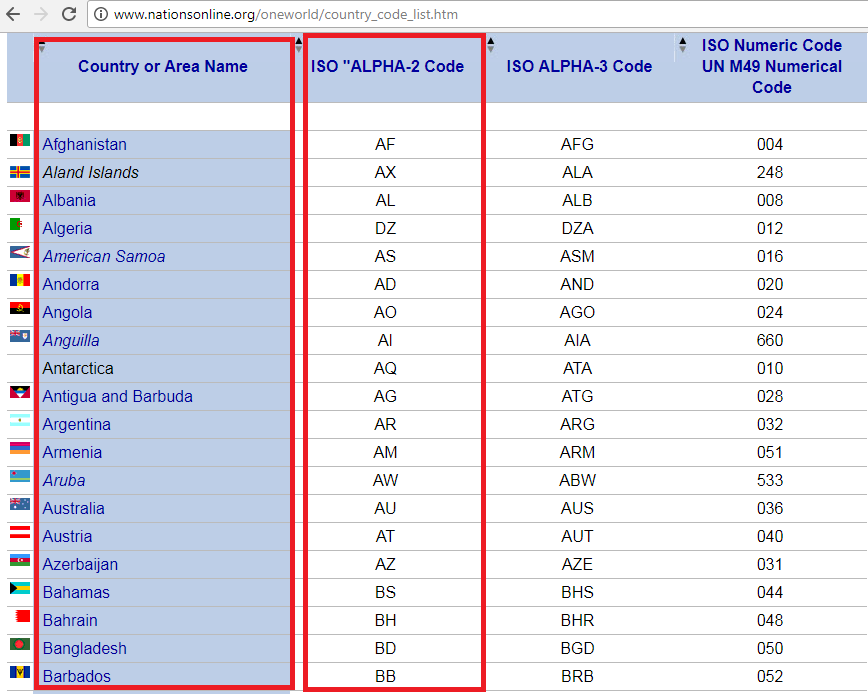 If there is some difference between the country names in our data and shape file country names, we have to add synonyms. This concept is explained in ‘Mapping layers’ chapter.

For US Physical map the attribute should contain US states names.

2. Metrics: Minimum of one metric is needed to draw map chart. Drag and drop a metric into ‘Color By’ drop zone. Any metric at the map region level can be used in this drop zone to create the HeatMap. We can add any number of metrics into ‘tooltip’ drop zone. These metrics will not be use in plotting of the map, but will show their value in tooltip when we hover cursor on the map.

The following sections will explain about the three vitara default maps.

Let’s consider the population density of the following five countries - United States, Russian Federation, Canada, Australia and United Kingdom. The following is the screenshot of the data file. 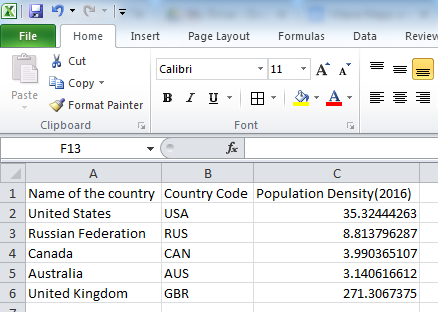 Add the data file to MicroStrategy dashboard or document. Drag and drop the country name attribute and Population Density metrics into ‘Map Attribute’ and ‘color by’ of drop zone field respectively. The default world physical map will show these countries. 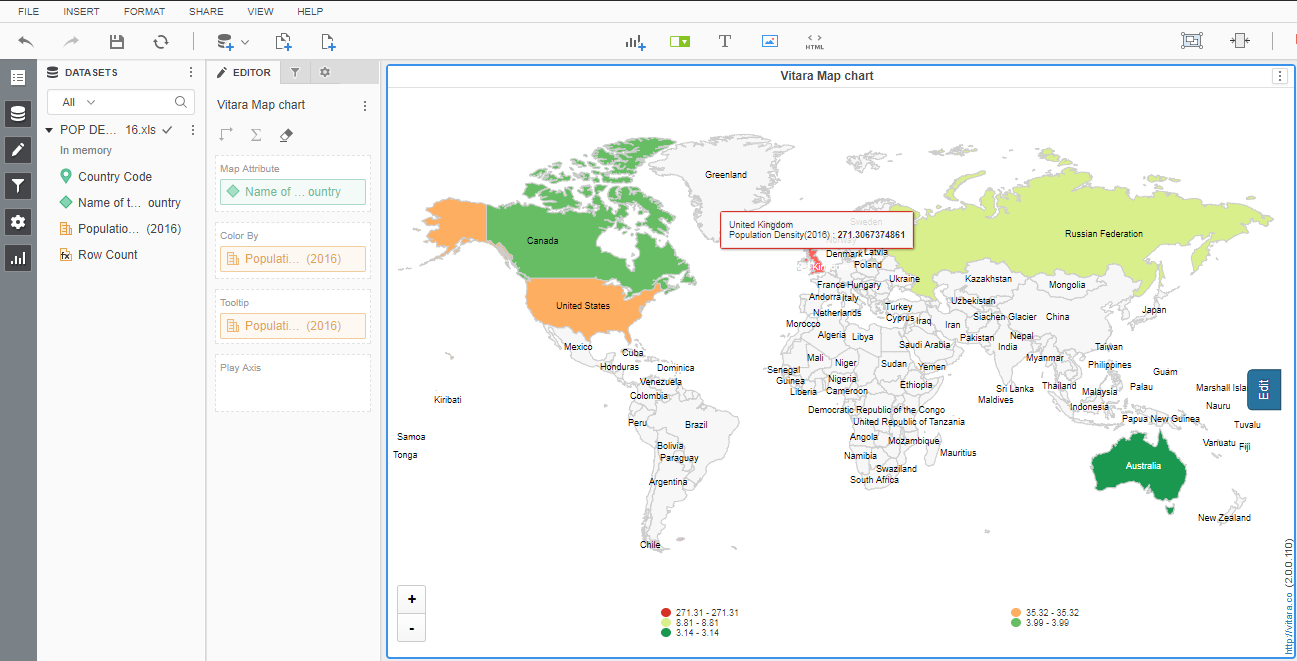 The below screenshot is the Vitara map chart showing Population density for all the countries. 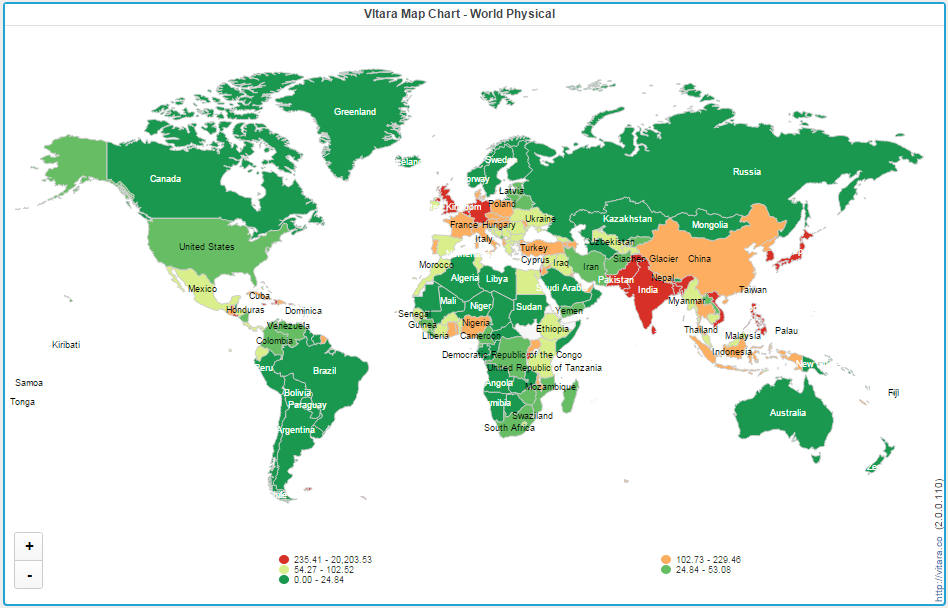 To show this map, let’s take the example of 2014-2015 net migration for the following five states - Washington, Arizona, California, Florida and New York. 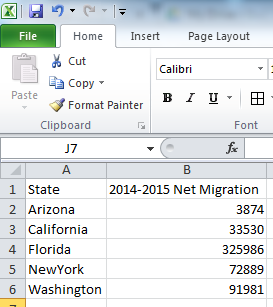 Add the dataset to MicroStrategy web or desktop. Drag and drop the attribute and metrics into drop zone. Vitara map chart will show World physical map by default. To change it to US Physical, click on ‘Edit’ button. Properties popup window will open. Go to ‘Map’ tab and expand ‘Map Layer’ tab, then select US Physical. The following screenshot is the output of the US Physical map. 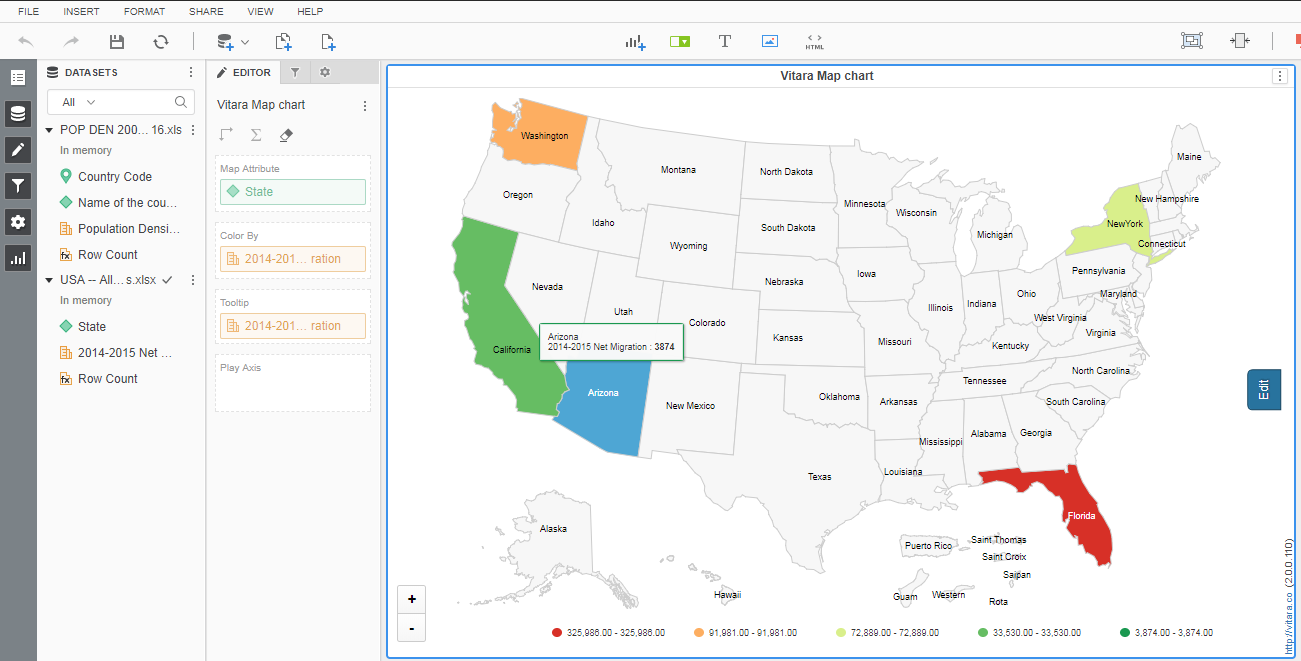 By default chart will show ‘World Physical” map. Go to ‘Edit’ and change the map layer to ‘US Counties’ map. The following screenshot is from the example data for counties in US. 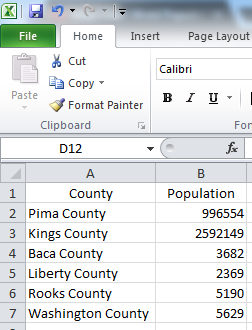 The below screenshot is output of the ‘US Counties’ map. 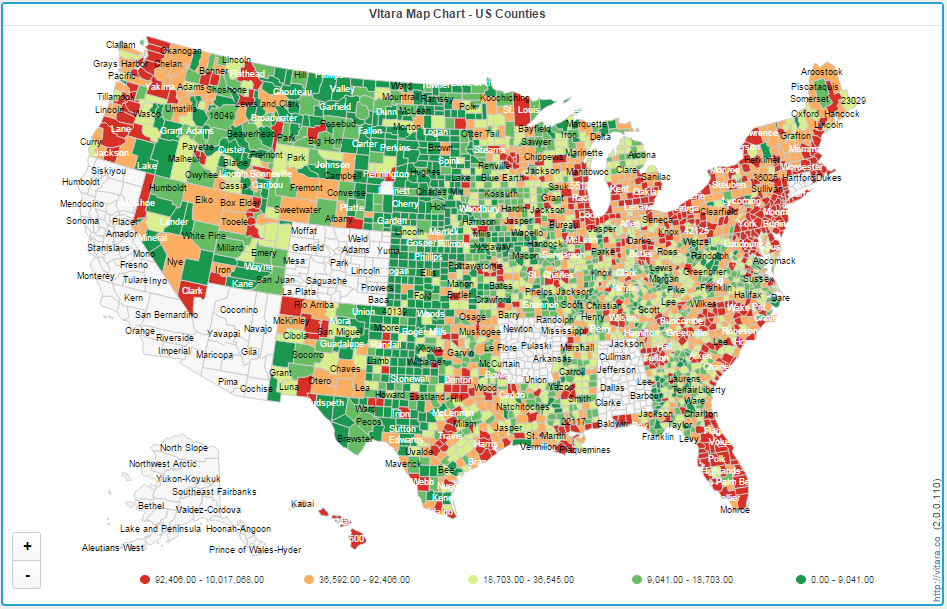 Click on the Edit Button→ Thresholds Button→ We can set Gradient Thresholds through conditions.

From version 5.0.0.484 , we have the option to adjust the slider to change the opacity of the desired class. 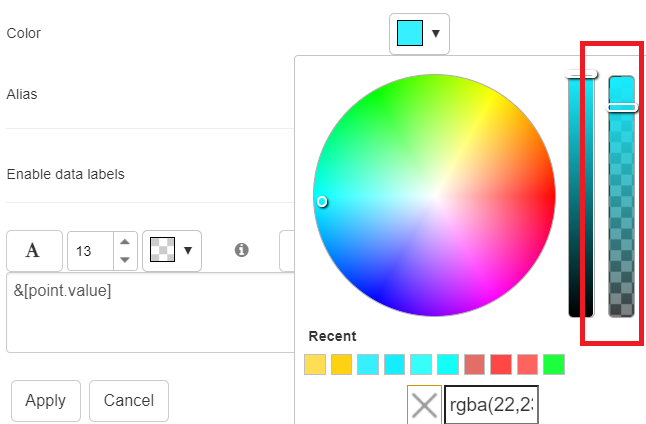 In the below screenshot, for the Vitara maps, we applied the Gradient threshold on Background Bar, and Red as Start color and Green as End color, with 5 Stops. Apply all the inputs and click on ‘Apply’ button. 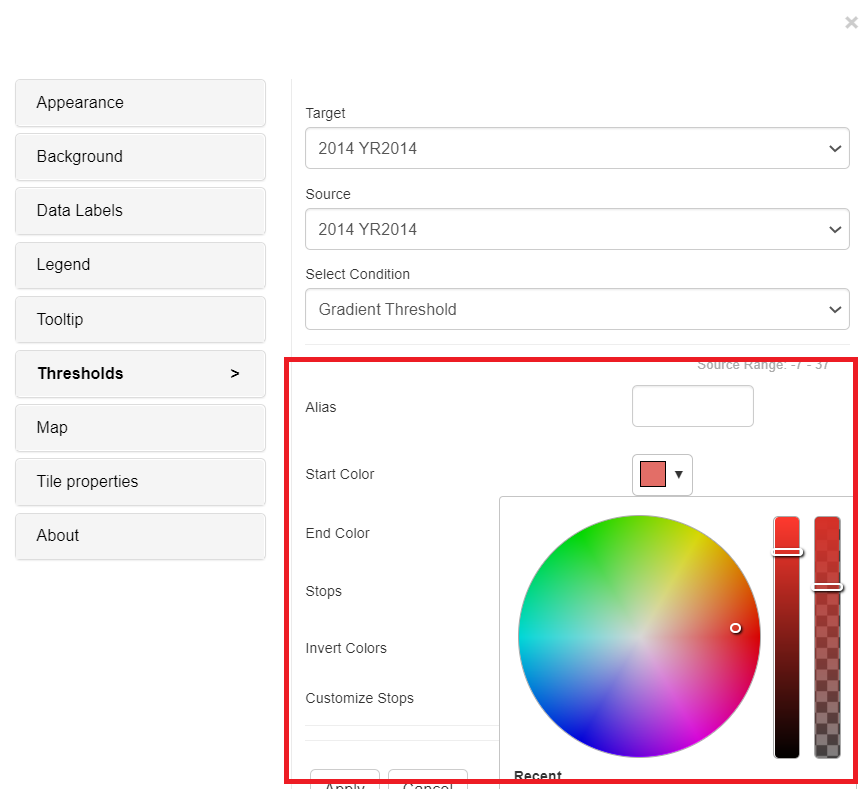 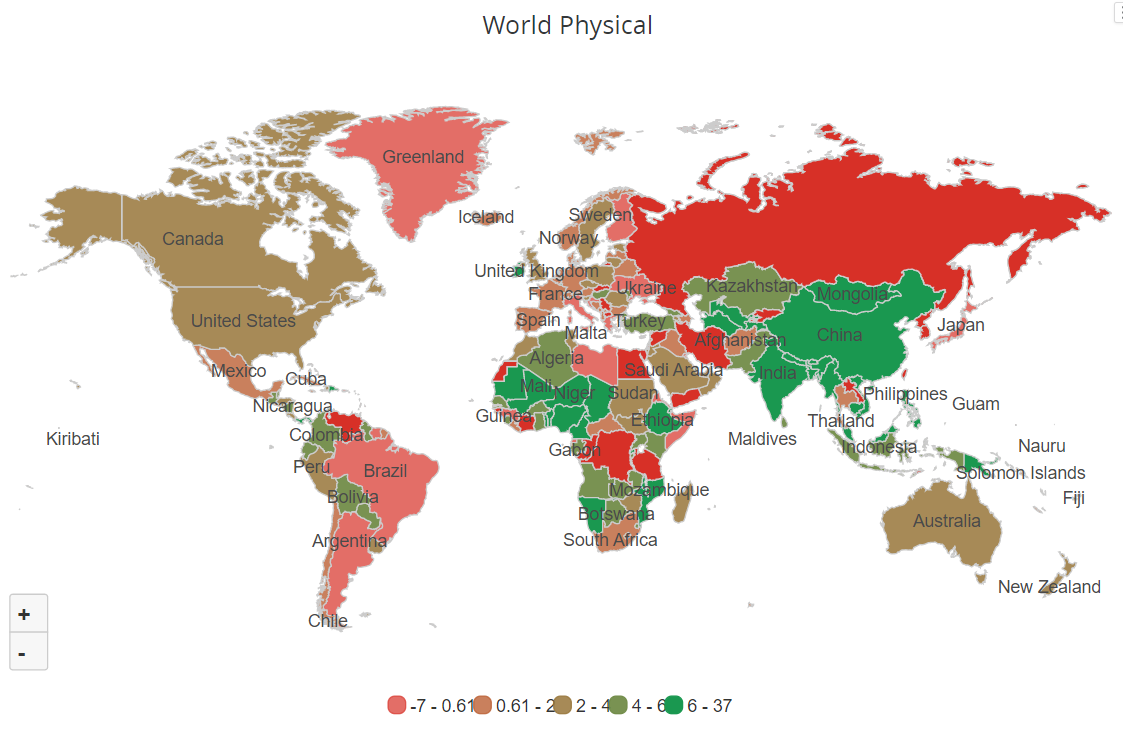 Note: From 4.6 version we can apply thresholds using attributes. The source drop down box in the threshold editor window will list all the attributes and metrics in the chart. We can select an attribute as source and define a threshold condition. The target of the threshold depends on the metrics in the chart. In this case we can set threshold using attribute. The attribute threshold conditions are listed as ‘Equal to’, ‘Not equal to’, ‘Contains’, ‘Not Contains’, ‘Starts with’, ‘Not Starts with’, ‘Ends with’, and ‘Not Ends with’ in these types.

Below is the screenshots how to apply attribute thresholds using property editor. Set target as ‘2016’ year and source as ‘State Name’ and select condition as ‘Starts with’ and enter the value ‘M’ and color as ‘blue’. Apply all the inputs and click on ‘Apply’ button. 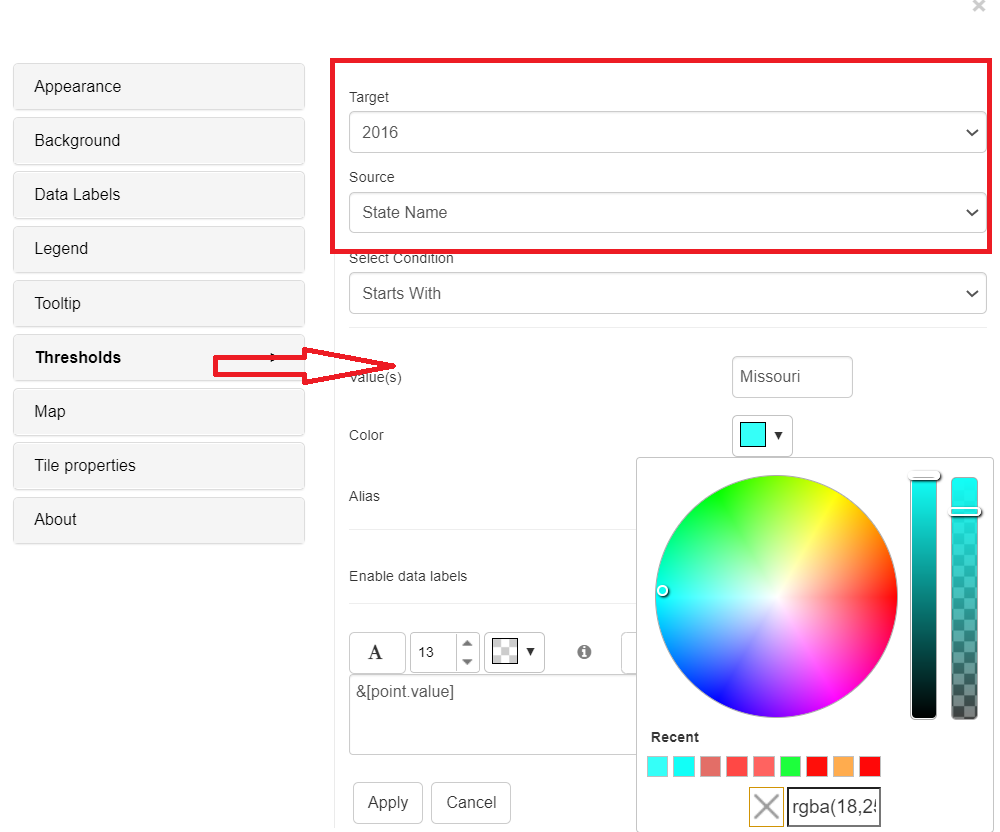 Below is the screenshot after applying the attribute threshold condition ‘Starts with’ with value ‘Missouri’. 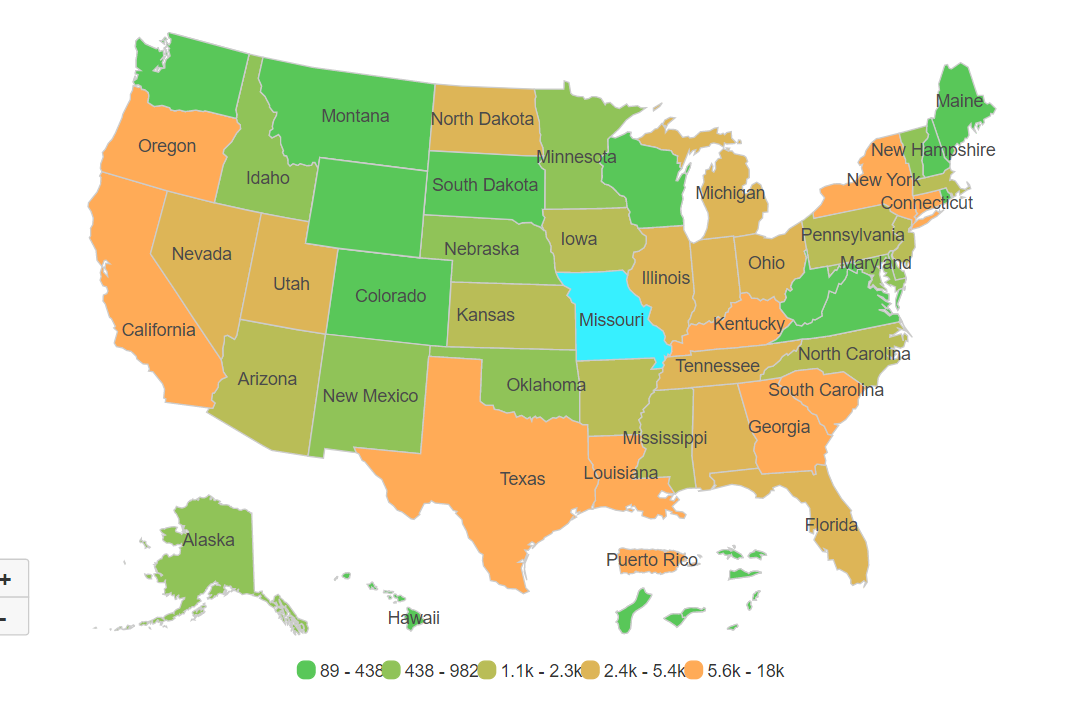 Here’s an other example, where ‘State Name’ contains ‘a’ and with color ‘Yellow’. 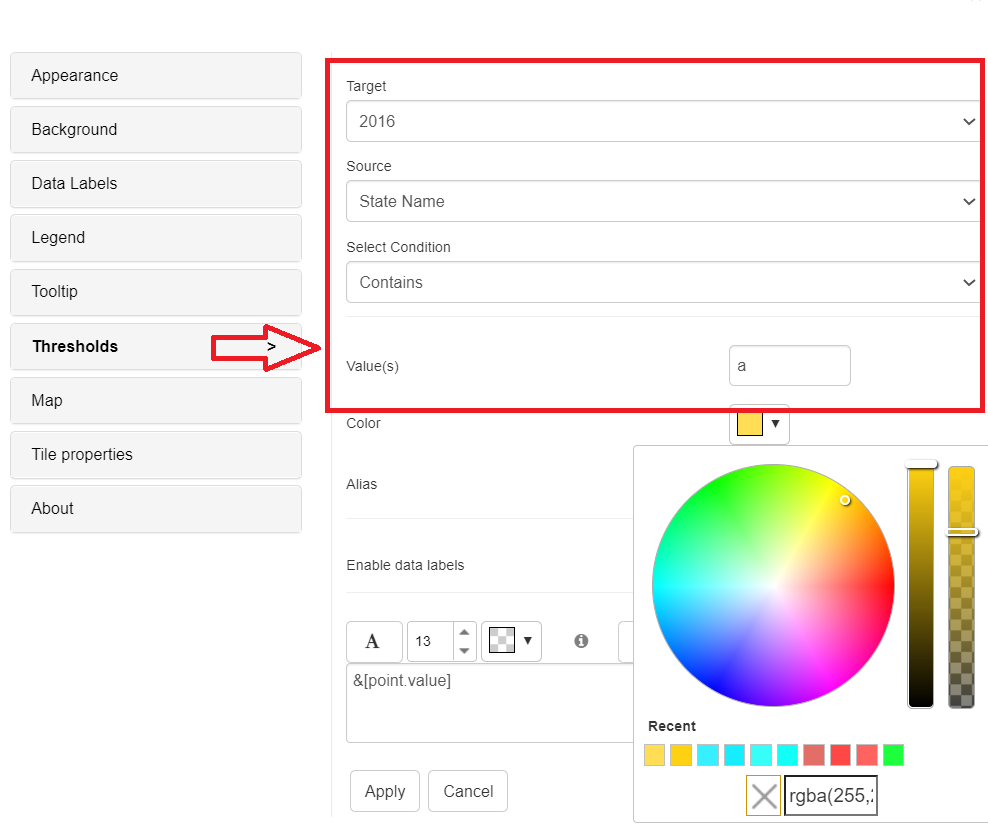 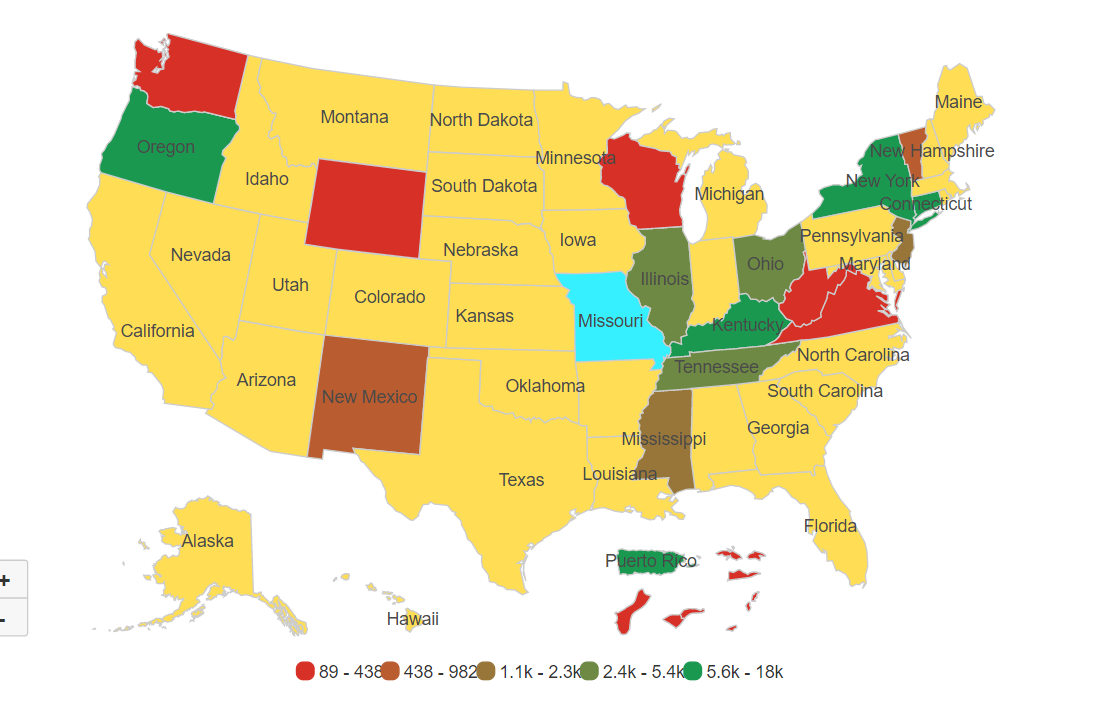